Menu
Log in
Register
Install the app
You are using an out of date browser. It may not display this or other websites correctly.
You should upgrade or use an alternative browser.

Tank is looking great so far! Excited to see how it progresses. Keep us posted on how you like the algae scrubber. I’ve been thinking of getting one for my 180 soon.

As I so often do, I got bored.

This is funny considering I am also tearing down my deck in the back, which is very BIG, but I also decided to install a Ecotech Versa pump to test it. I was able to get one a few weeks ago, and I did post a thread that BRS had them, SO!!! I was going to just use it to dose Tropic Marin part C, but that is a long way off, so I figured I would test it to see if I can do a auto water change from my mixing station in the basement. I installed the pump an ran the 1/4 tubing. It will go from my basement up a floor, and over roughly 40 ft to a bucket. If that ain't a torture test then I don't know what is.

If I don't have any issues, which I really don't think I will, then I will use 3 single Ecotech Versa pumps. 2 for the auto water change, and a 3rd to fill my ATO container. Some people may ask, why don't you just use the pump to auto top off your tank with RO/DI water and skip the ATO container, and my response will be I don't want ANY pump that has access to 100 gals of RO/DI water to have free access to my tank. I love Ecotech products, but I will never fully trust technology. 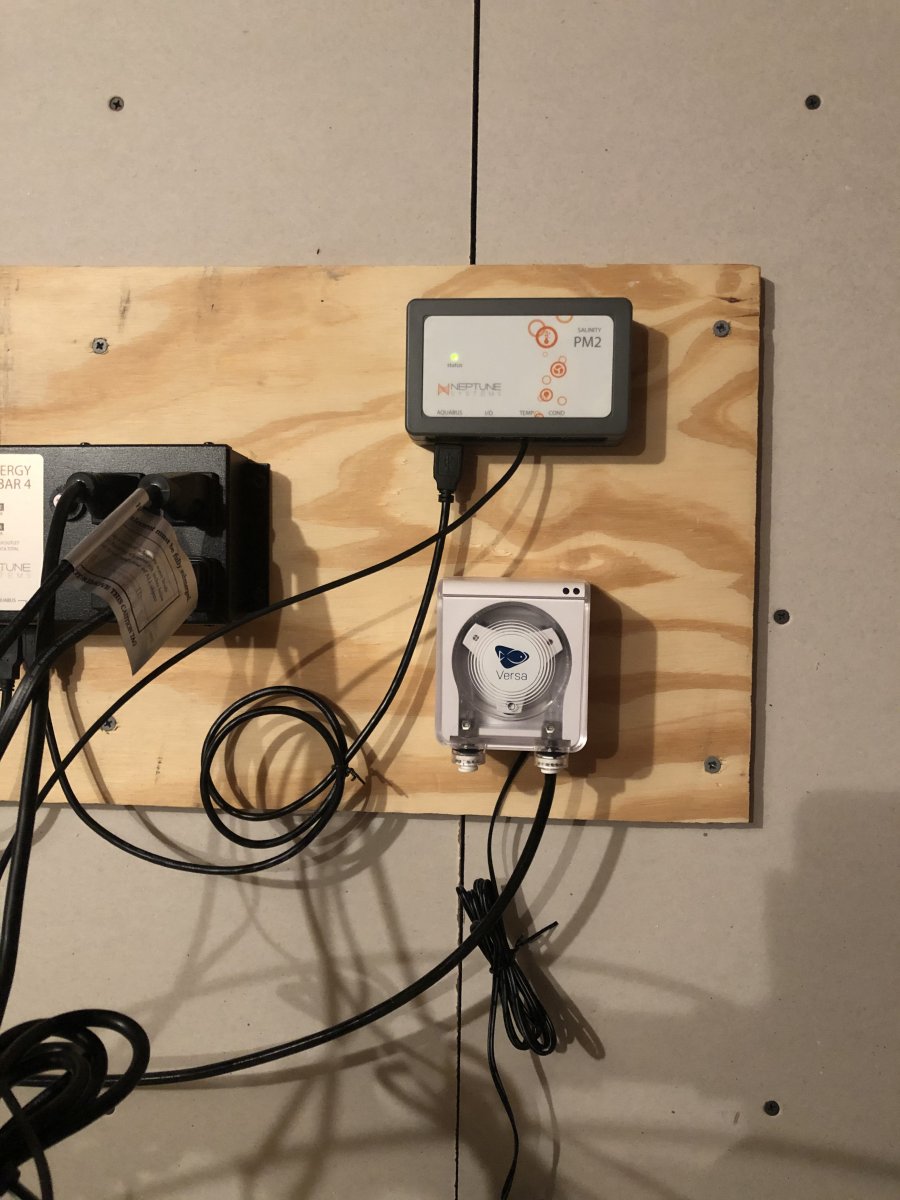 I finished running the 1/4 in tubing and powered on the Versa. It took me, LITERALLY, a few minutes to update and program the Versa via Mobius. It took far longer to prime it, LOL, as I am lifting water from the basement and thru 60 plus ft of tubing. My first impression, well, all I can say is WOW!!! The fact that if can lift water 1 story and thru 60 ft of tubing is impressive. I will let it run a few days before calibrating it, but so far I am impressed.

I am currently letting it sit for a little to make sure I don't have a siphon issue. If I don't have any then I will program the Versa to pump around 5000 ml daily for a week or so and start to check the calibration.

Well fellow reefers that have been following along, and I do appreciate it, my tank got moved to its final position today. I started to put the plumbing back, I still need to make sure it is tight. I will probably need to buy a strap wrench to tighten a few bulkheads as they are way to hard to get to by hand. I also installed the light standards, they are not at their final position, but I just needed to install them to do something, LOL!!! I am going to try and get it wet this weekend. 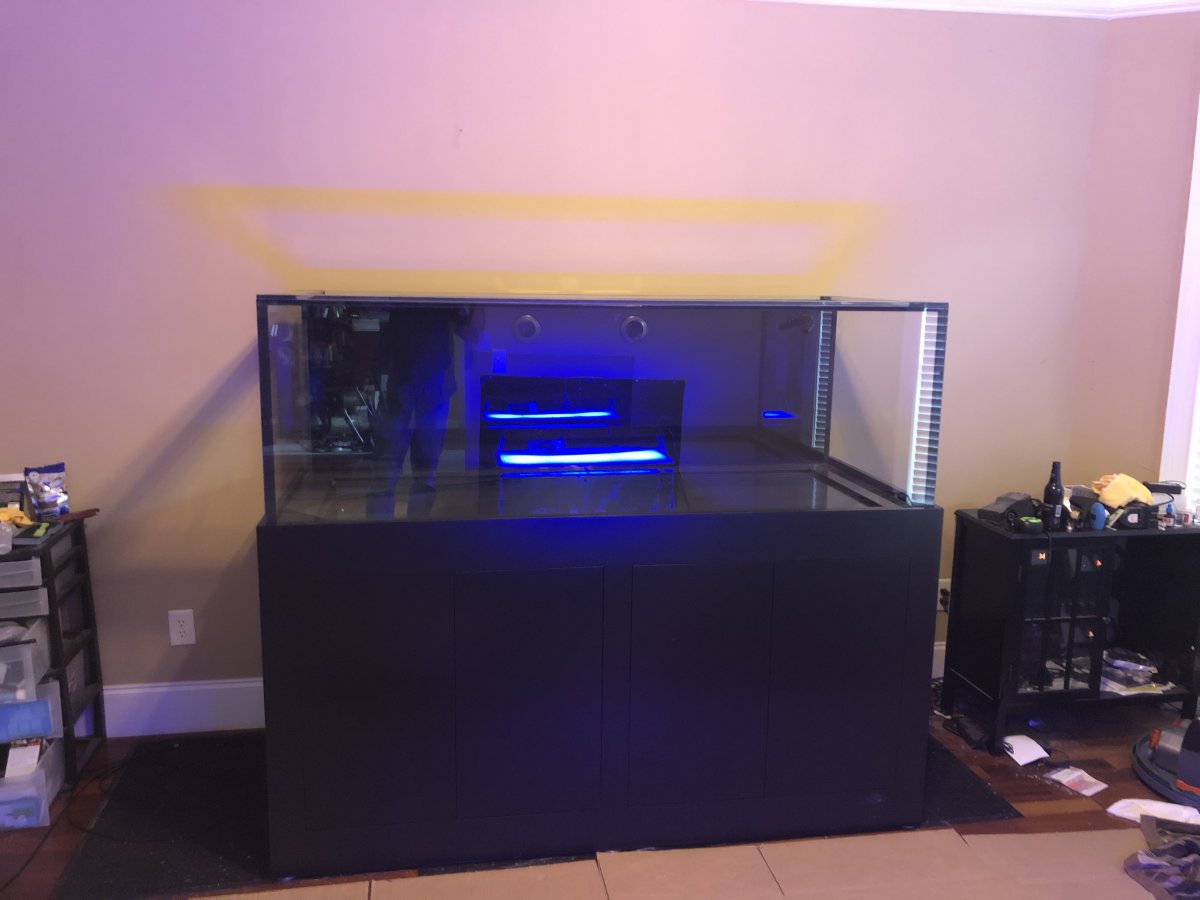 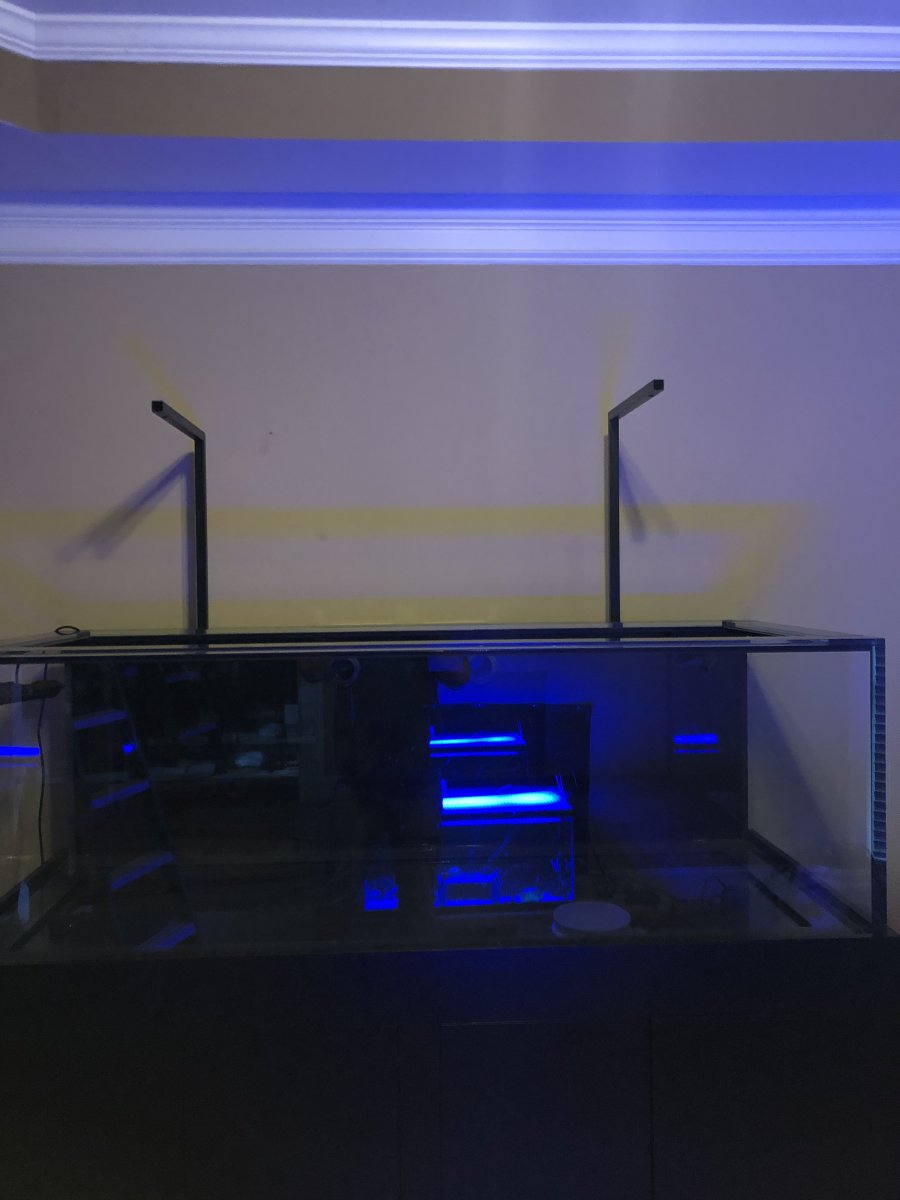 I started to move the aquascape from upstairs to the tank downstairs. This is going to be a SLOW process as I will be securing it further along the way and I see areas that may be unstable. I placed a towel on the eurobracing to protect it. I am currently waiting on some of the Marco rock cement to cure before going any further. Once the 3 sections of foundation are in, the rest will go in quicker as it has already be cemented together. I may also use superglue and some rock dust to cover the cement areas. I can't do it on the sections that are soaking currently in the brute cans with the lick rock, but I can on the actual dry rock. 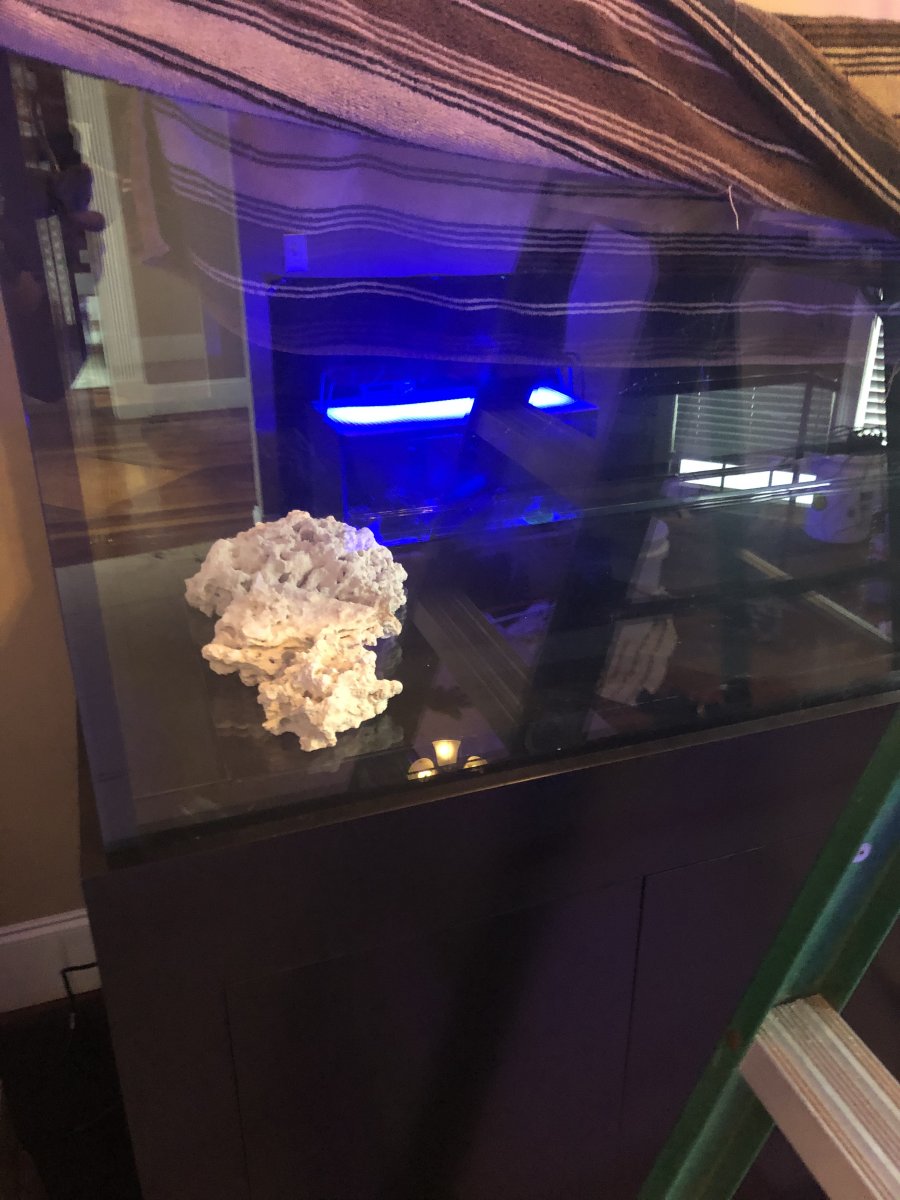 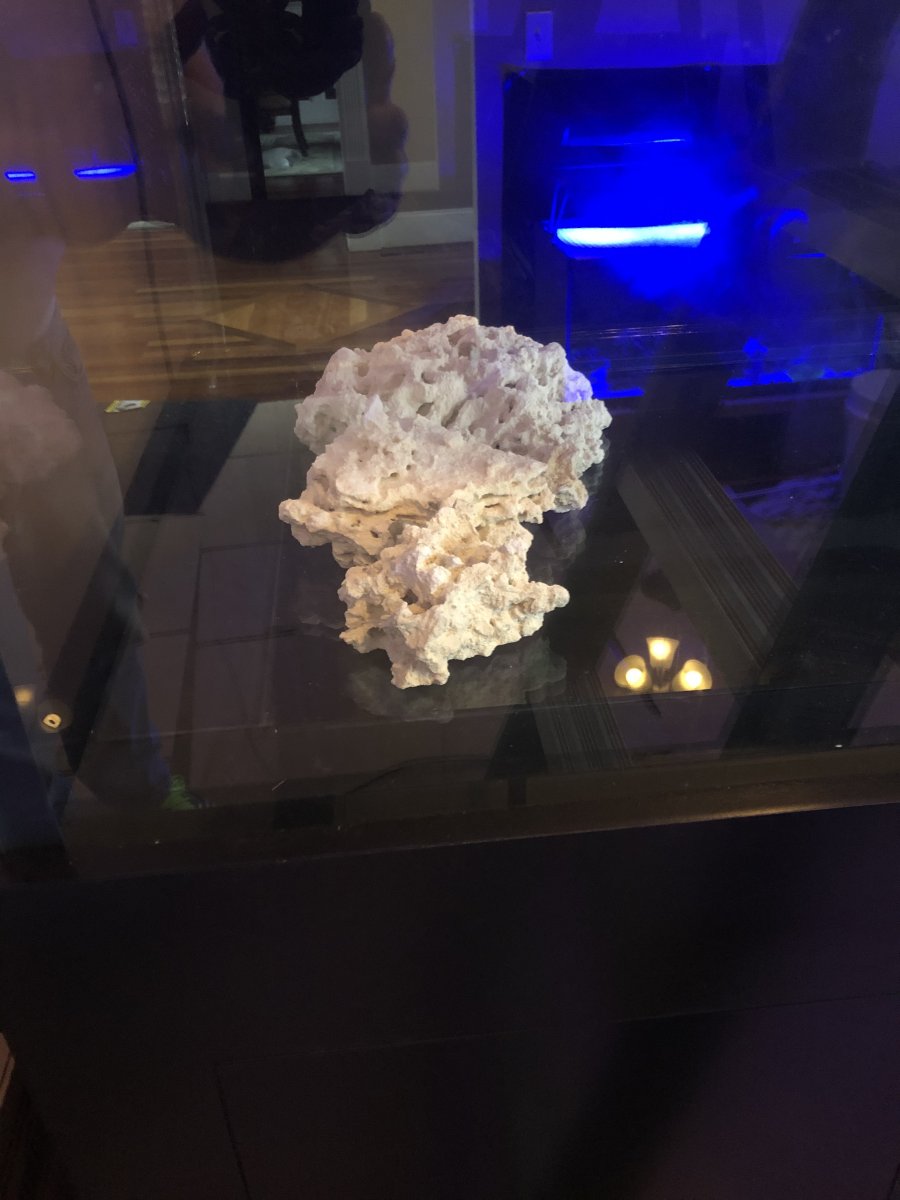 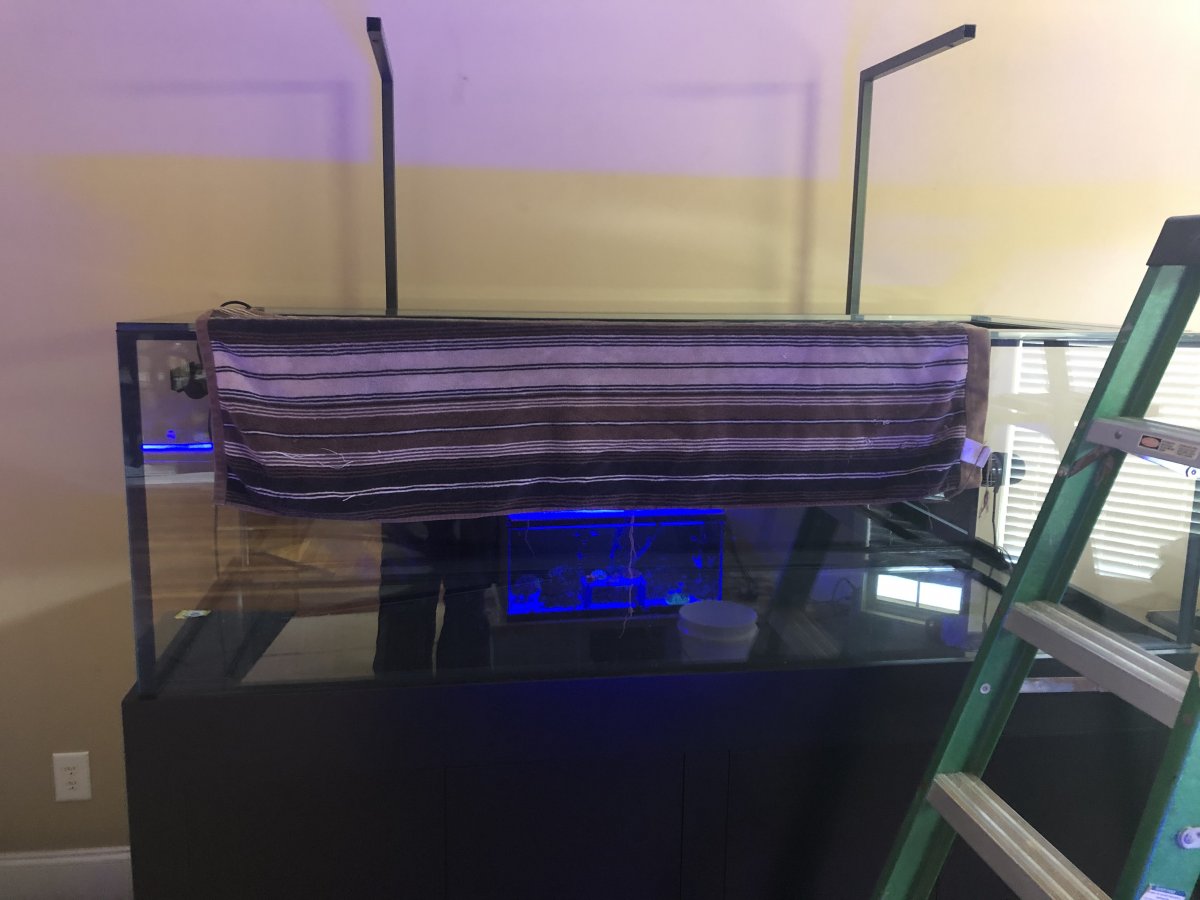 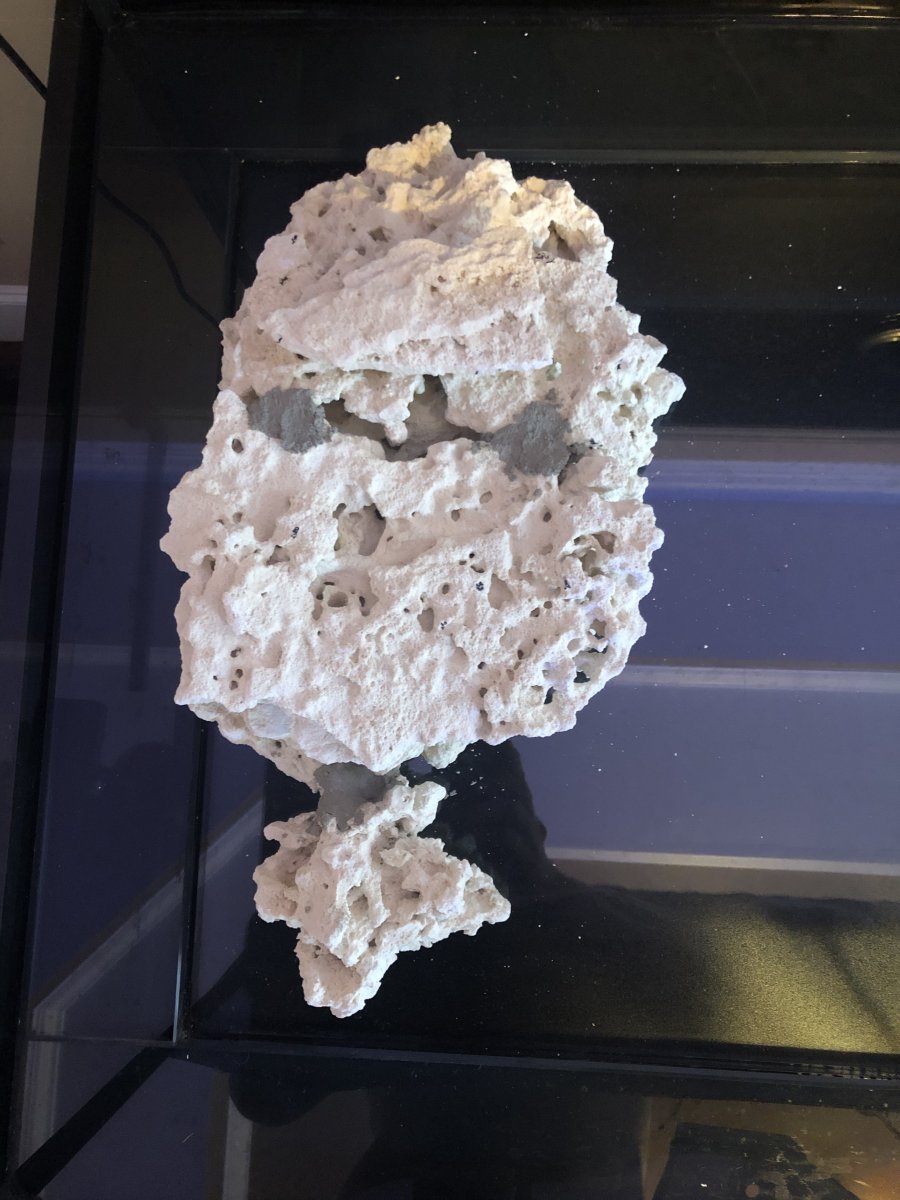 I was getting frustrated having to move the scape and trying to get it to go back the same way it came apart, UGH!!! I took a break, saying I was done for the day and I would try again tomorrow. Thankfully, I am as stubborn as a mule. After a bit I went back to it and,’after a few minutes, I am at the point where I can not do any more of the scape until I start to add the sand and water as the rest of the scape is in a brute trash can with live rock. So it looks like I will be able to get it wet this weekend. Stay tuned as I may end up filling it tonight, knowing me, and not being able to stand still, LOL!!! 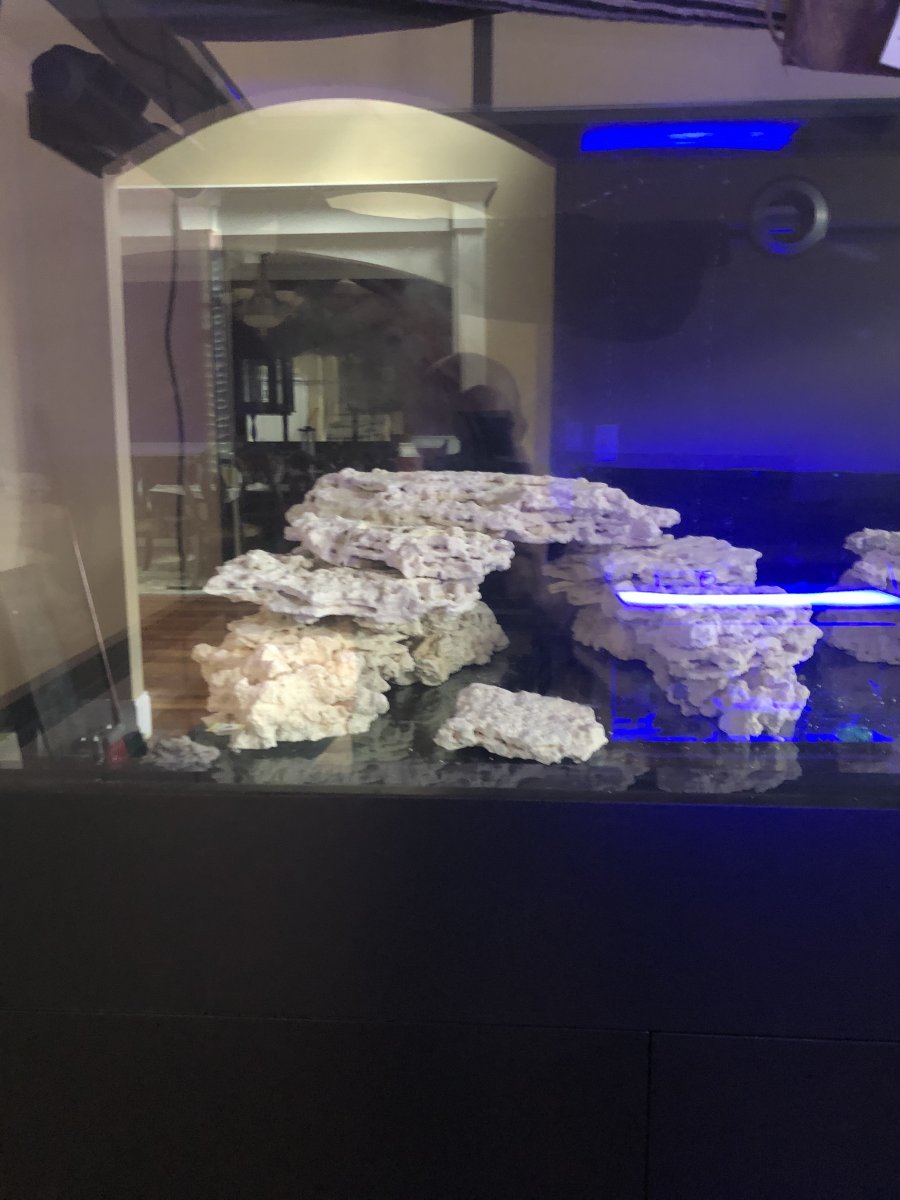 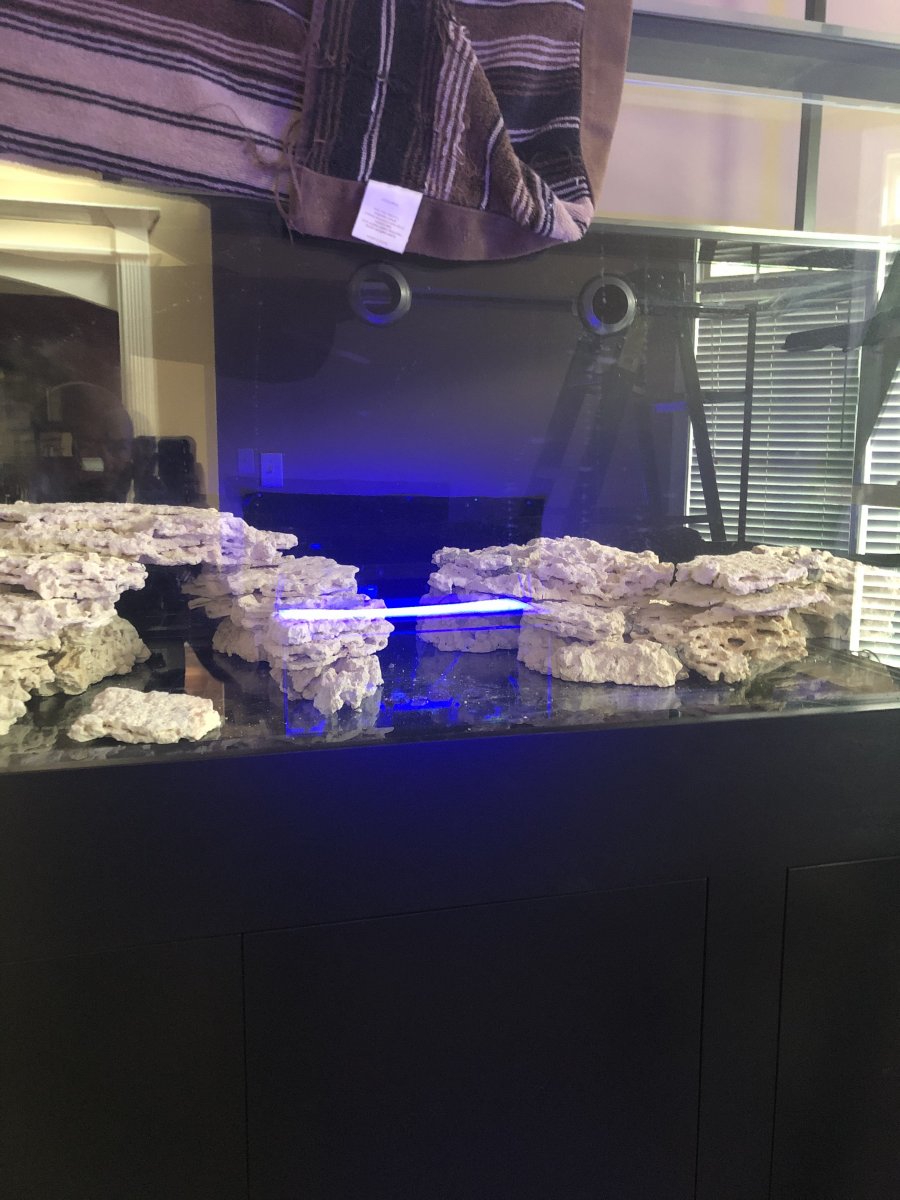 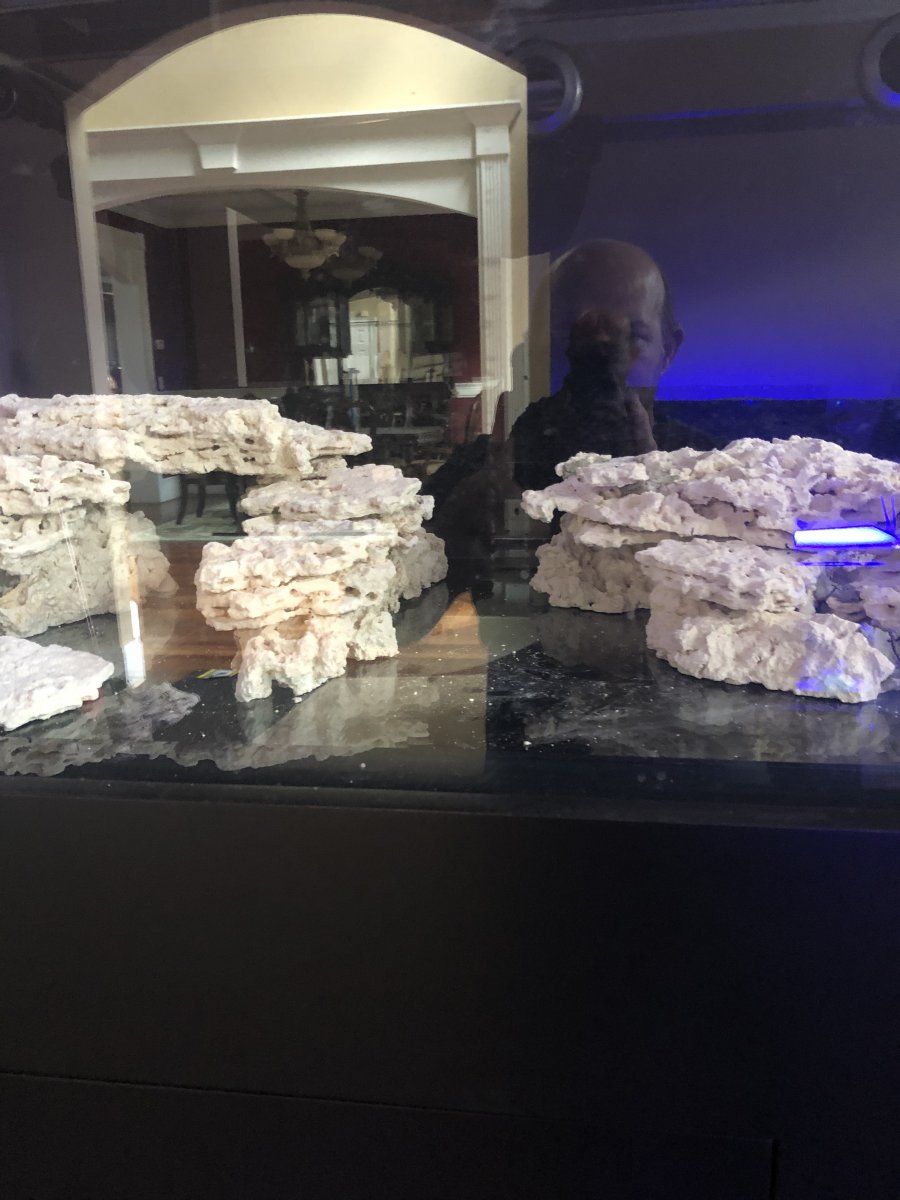 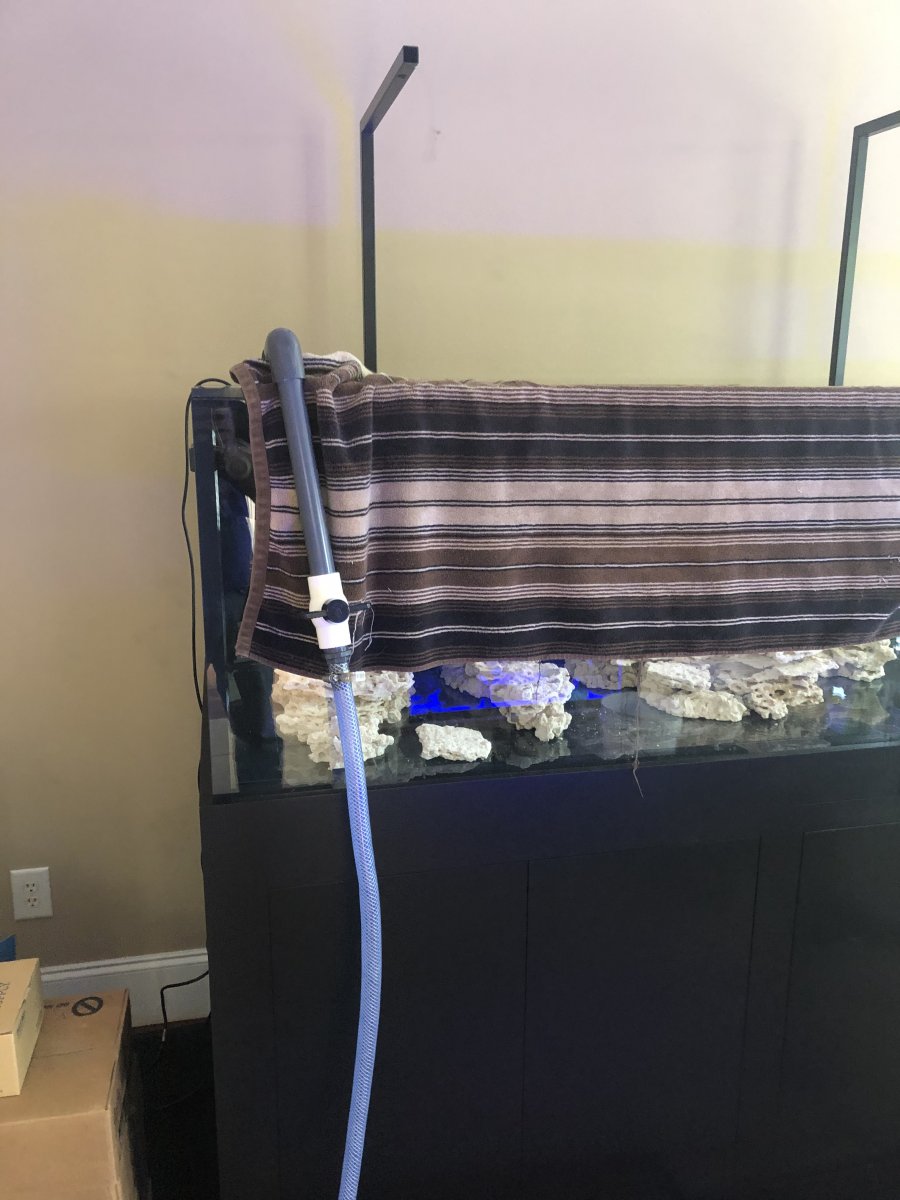 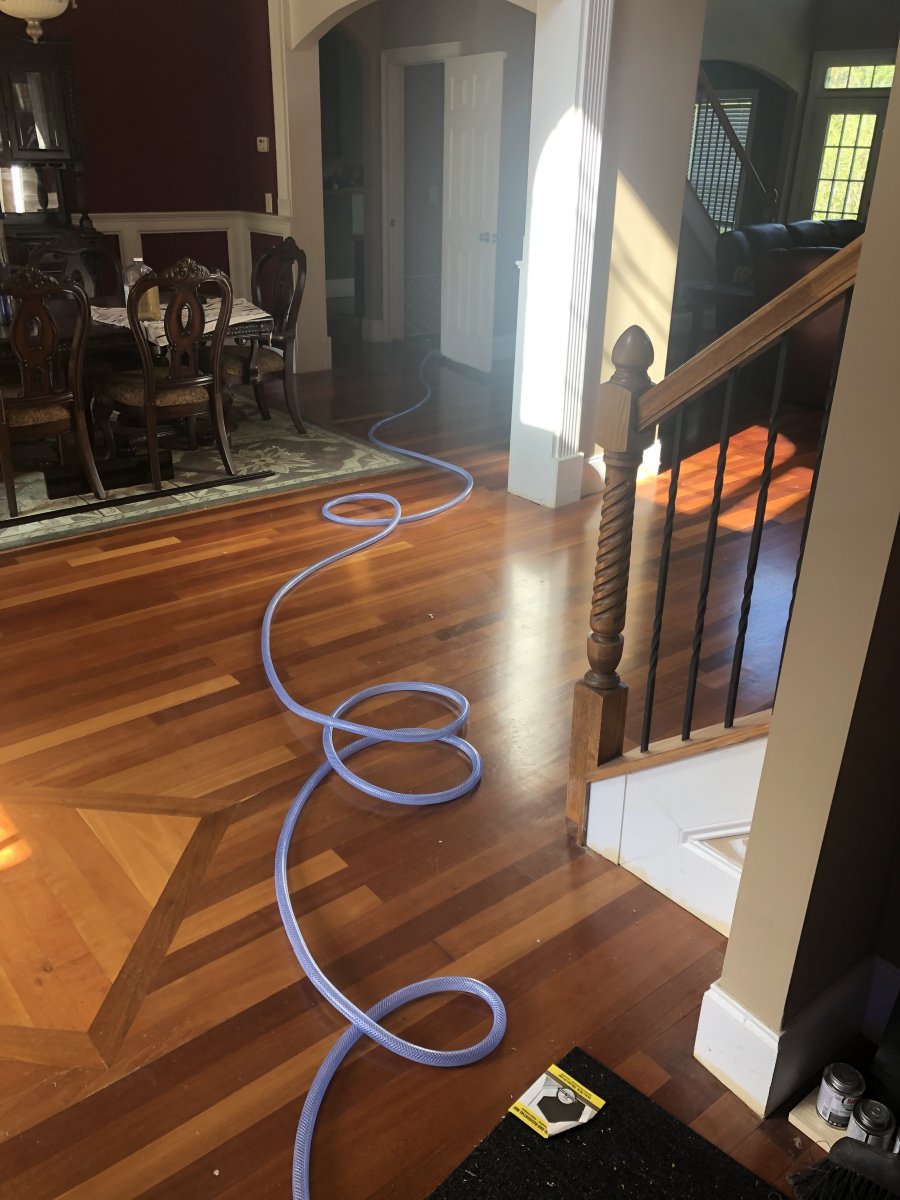 WELL, like I said, if things go right the tank may be wet by tonight. GUESS WHAT, THE TANK IS WET!!! WOOT WOOT!!! 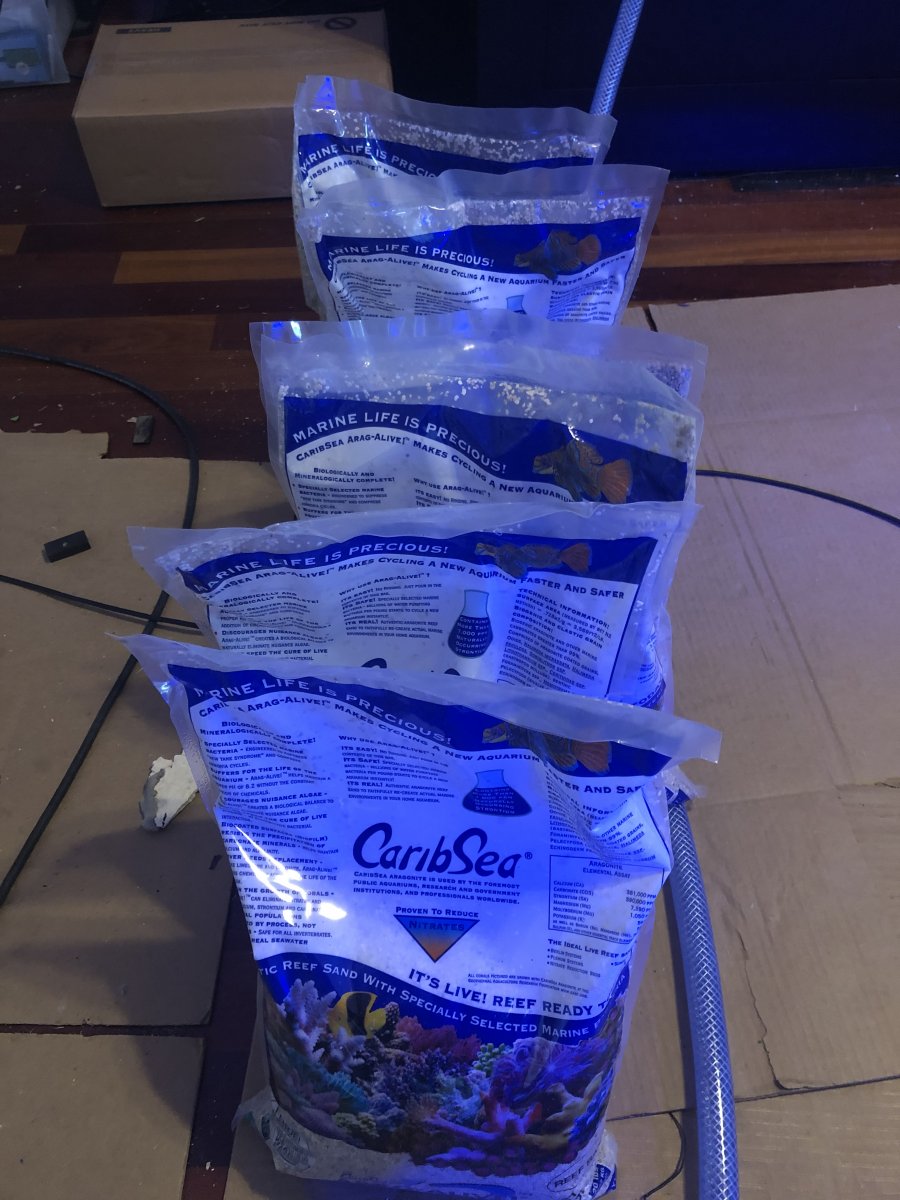 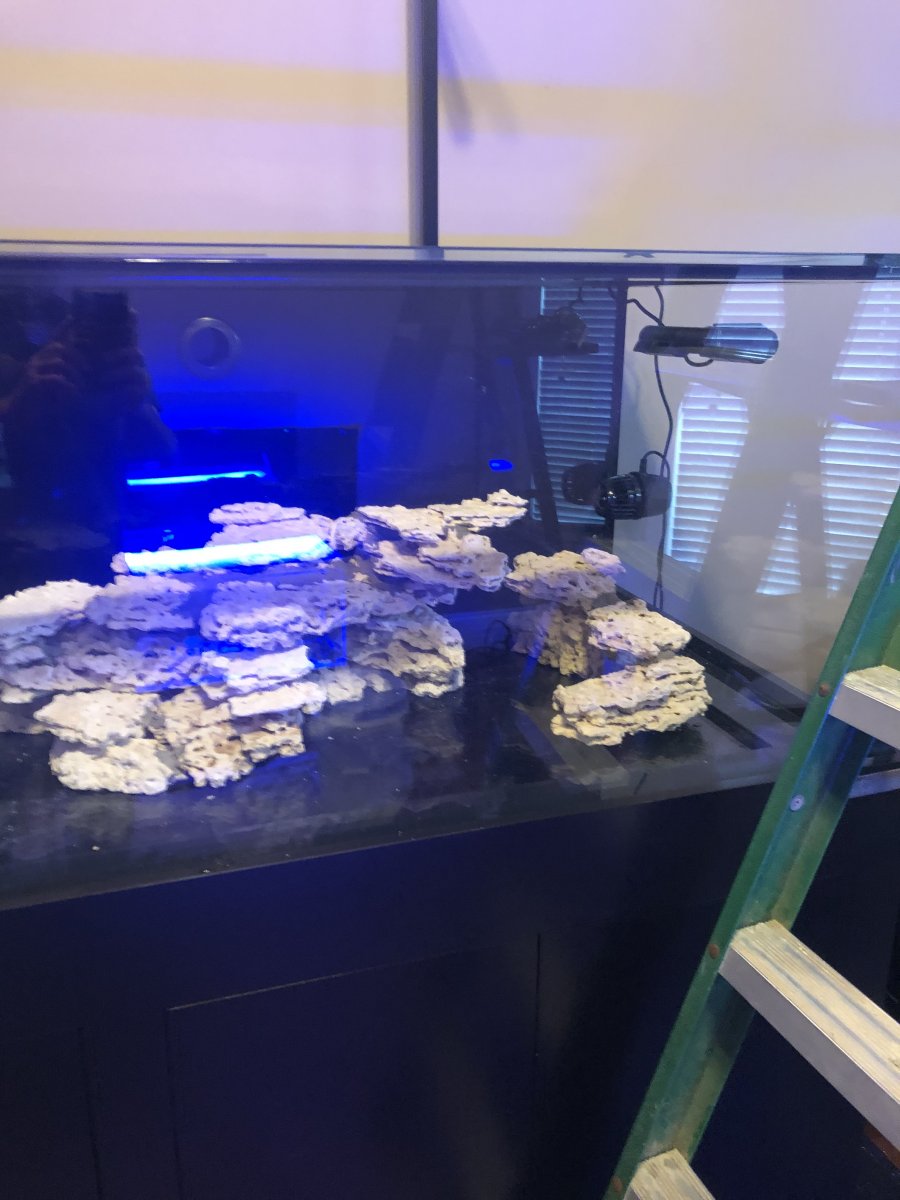 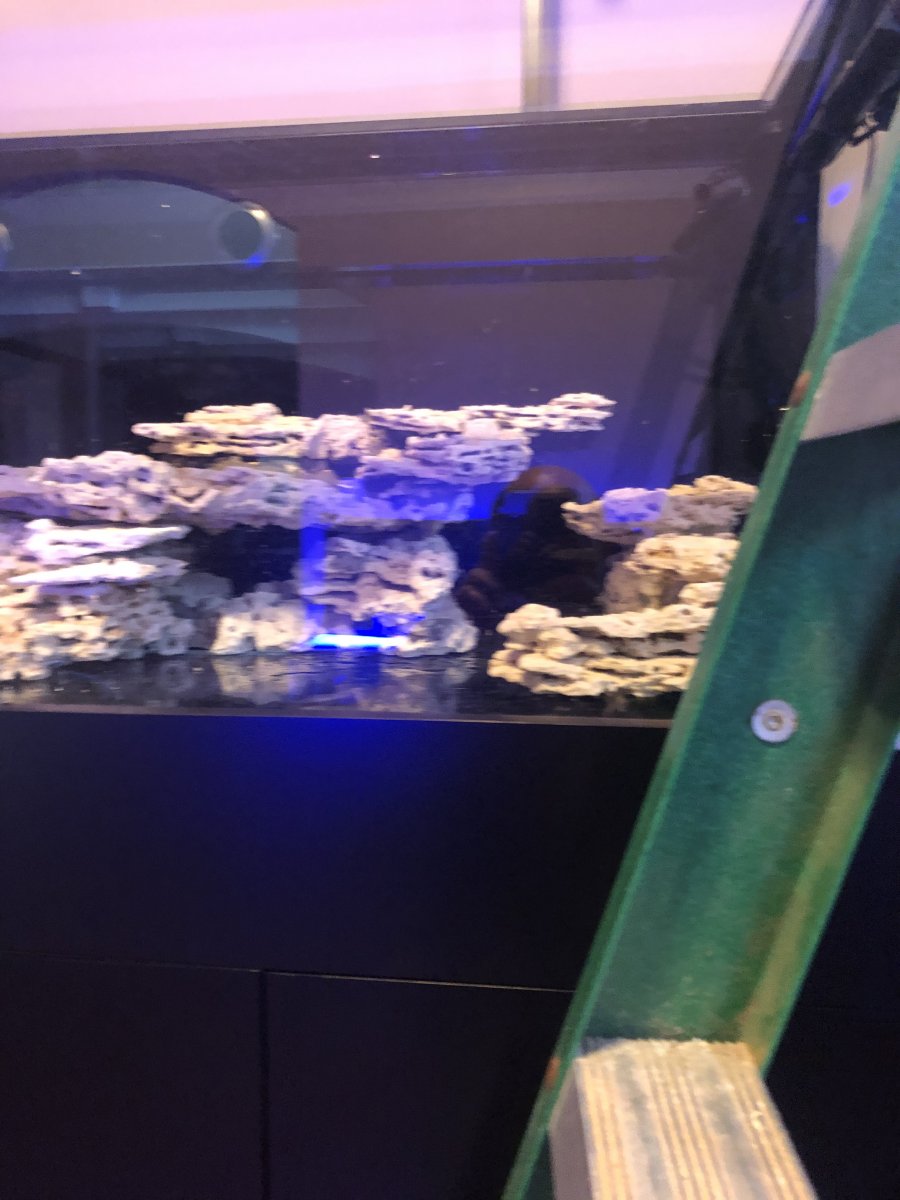 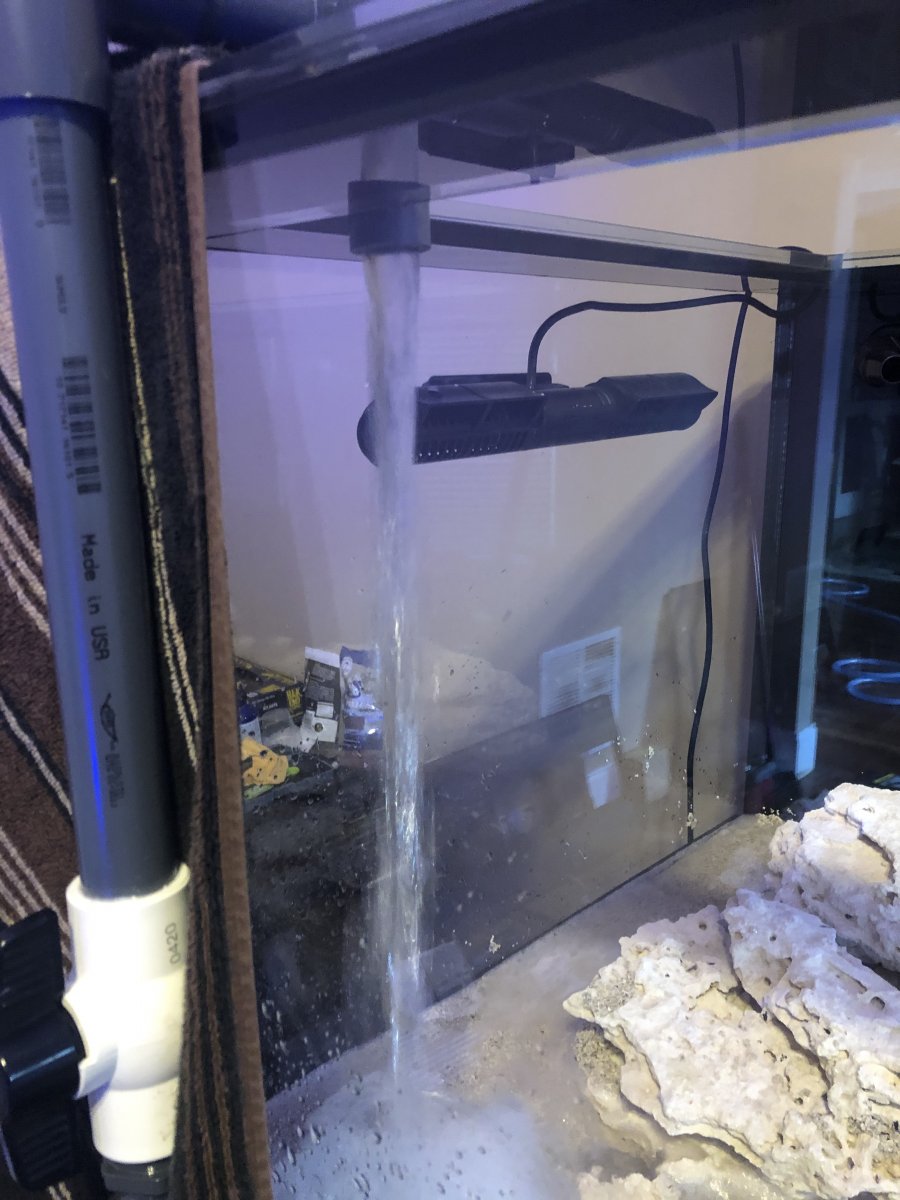 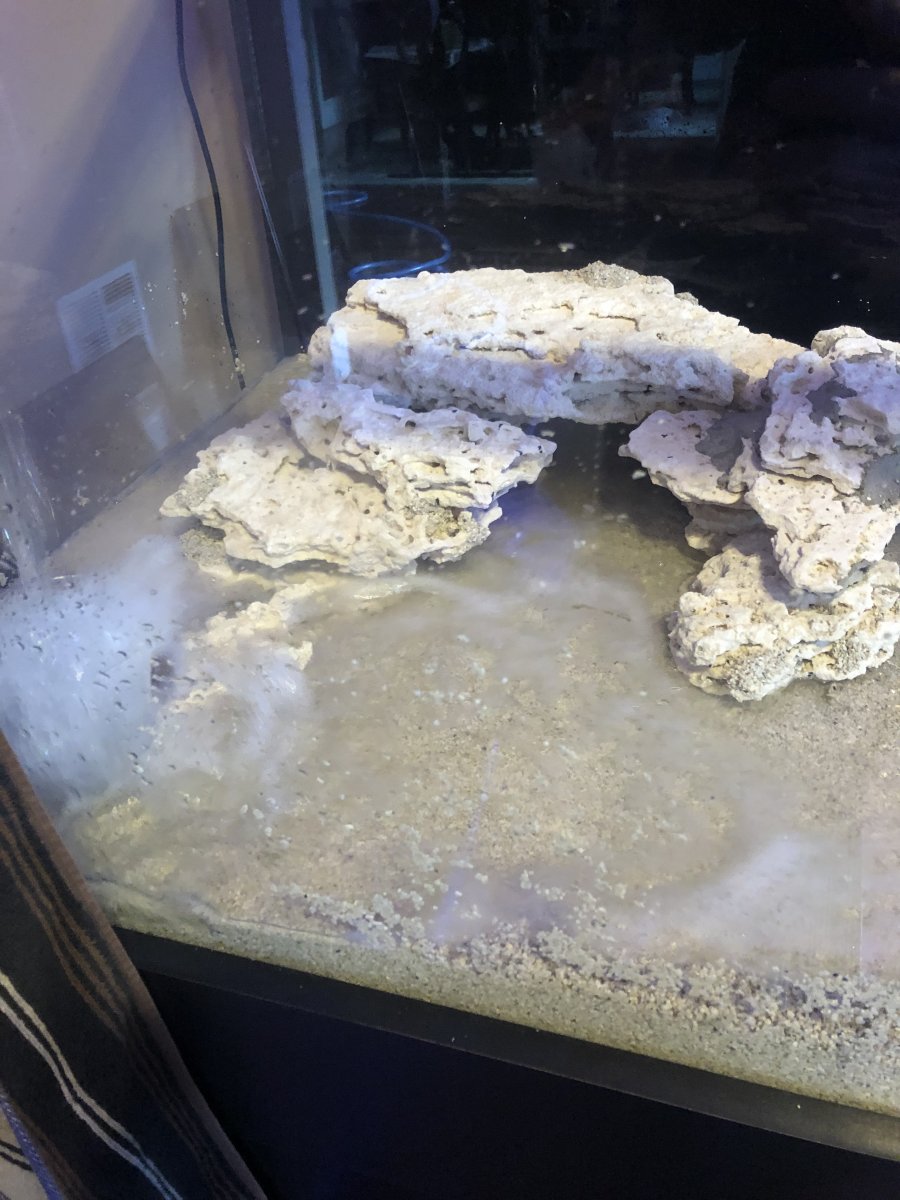 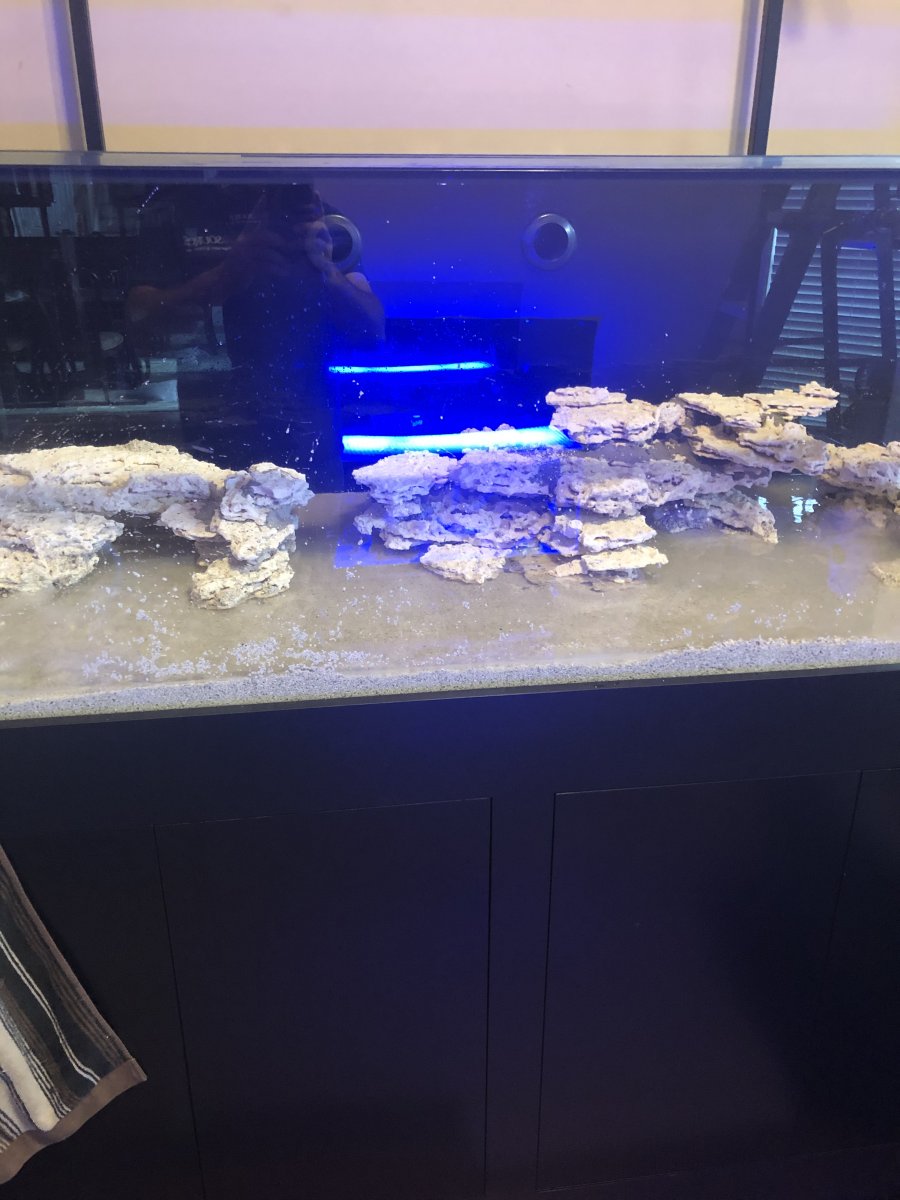 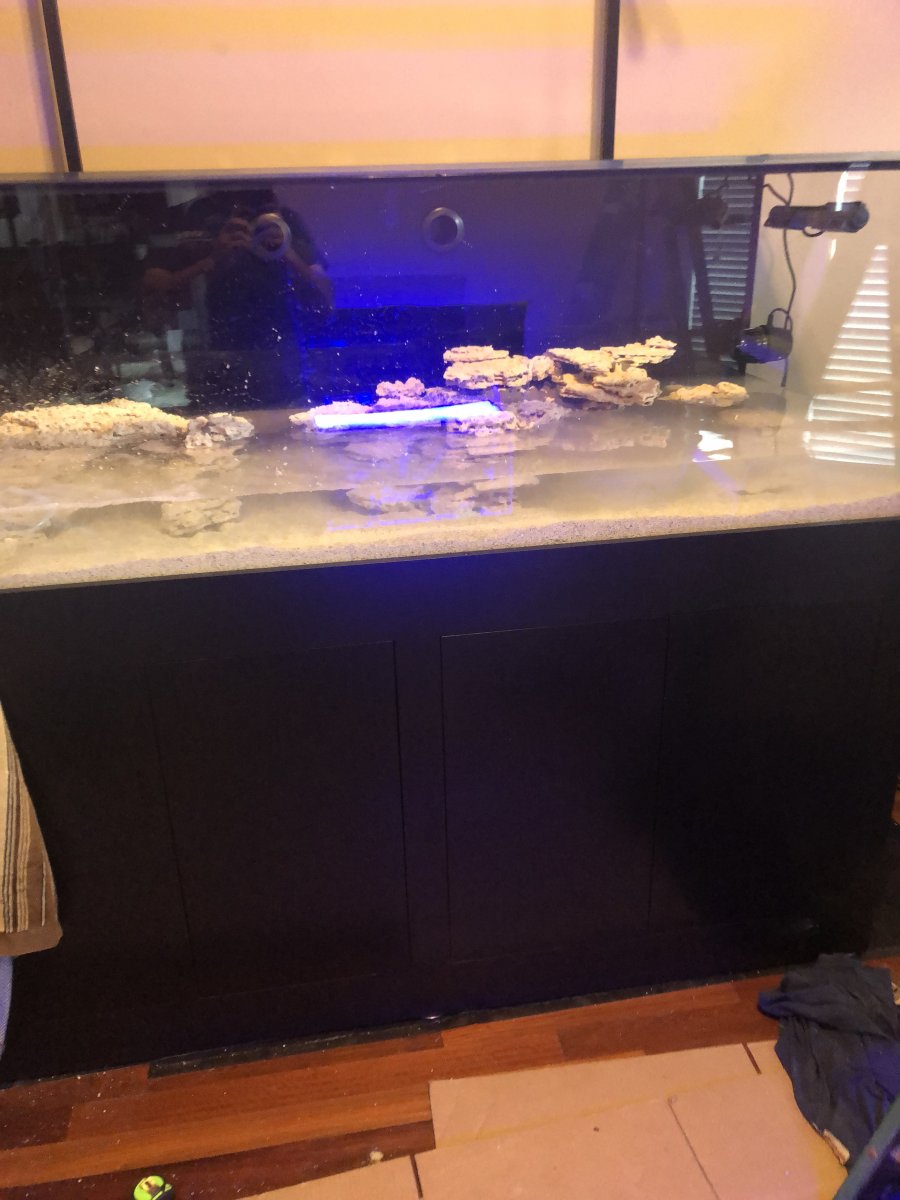 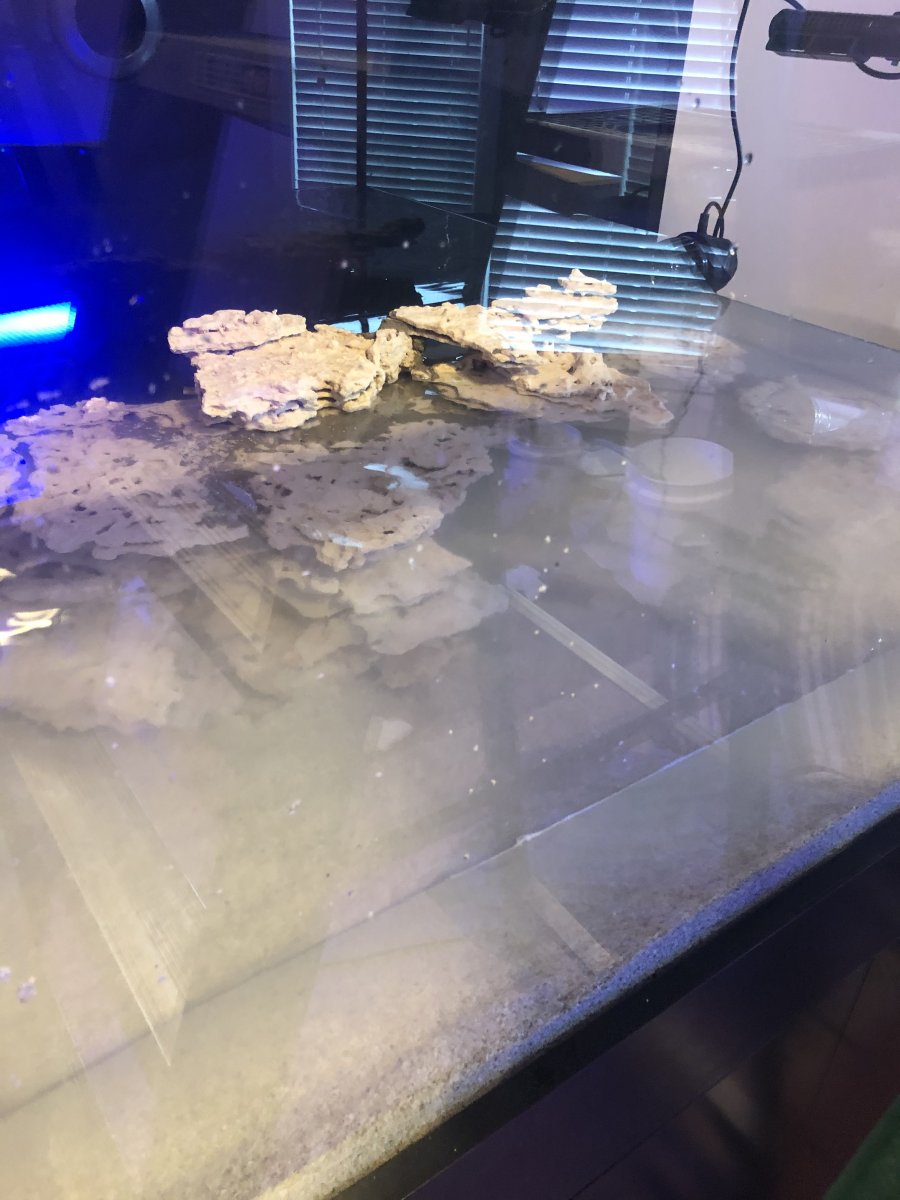 Good work Bill! Excited to see it all come together.
4

trizzino said:
Good work Bill! Excited to see it all come together.
Click to expand...

Only to tear parts of it down to fix water leaks on bulkheads and such, UGH!!! I am now having to drain one of my check valves so I can lower the water level enough to pull out one of my flow sensors and reseal the threads. Its always something, LOL!!!

Thank you, I still need to tweak it a little. I need to move the rock structure on the top left outward a little to level it and add a few overhangs. It was a major pain to try and get it back together the same way it came apart when I moved it this weekend, LOL!!!

This is what it looks like now, after I added a few more pieces.

Billldg said:
Only to tear parts of it down to fix water leaks on bulkheads and such, UGH!!! I am now having to drain one of my check valves so I can lower the water level enough to pull out one of my flow sensors and reseal the threads. Its always something, LOL!!!
Click to expand...

Yep. I remember those pain points when redoing my plumping on the 125. However, once you get those corrected it's not typically something you need to do again. Makes me appreciate the AIO's now.

Billldg said:
Thank you, I still need to tweak it a little. I need to move the rock structure on the top left outward a little to level it and add a few overhangs. It was a major pain to try and get it back together the same way it came apart when I moved it this weekend, LOL!!!

This is what it looks like now, after I added a few more pieces.

That is an awesome thank. Looks great Bill! Congrats on the water..

DiefsReef said:
That is an awesome thank. Looks great Bill! Congrats on the water..
Click to expand...

Here’s a pic of my first occupant of the tank, WELL, sort of, LOL!!! Brittle stars are a bit shy. 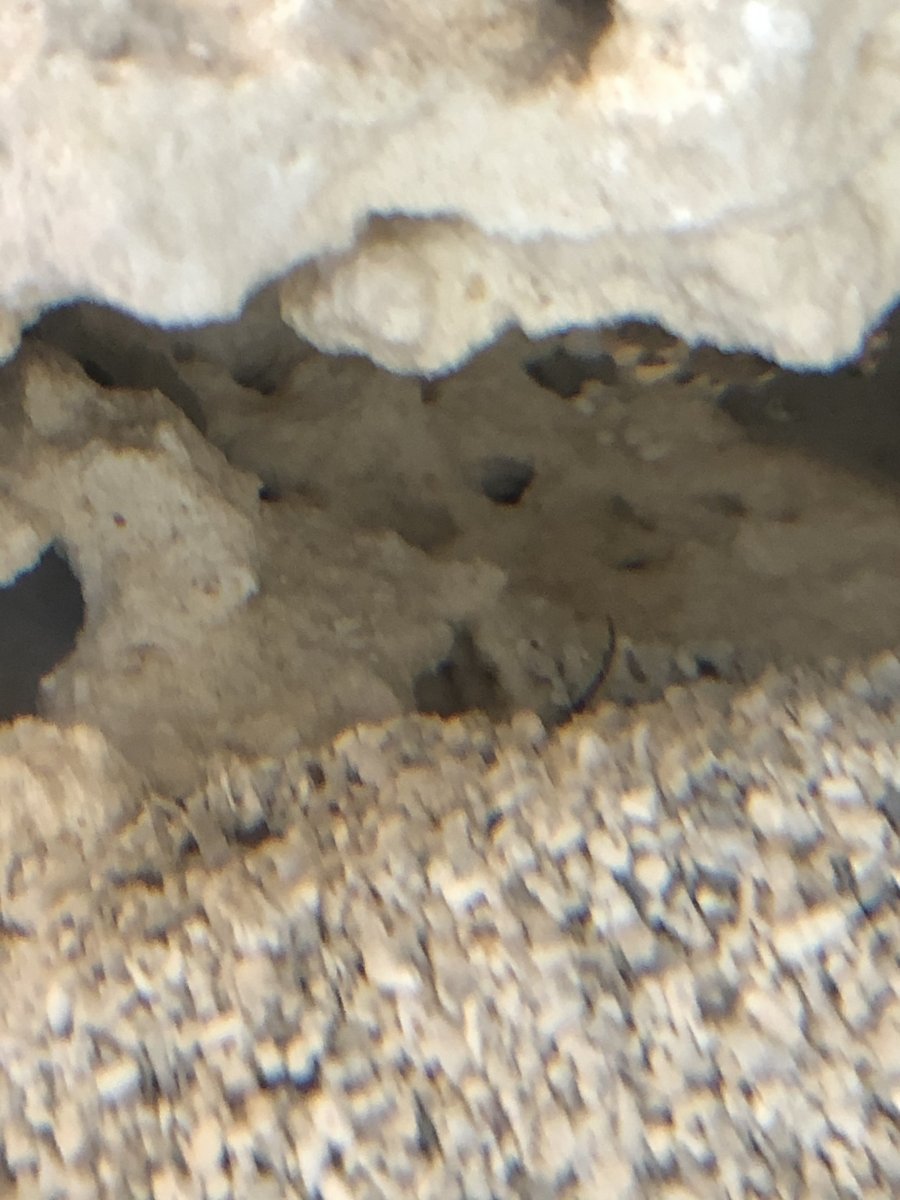 I also added 2 smaller pieces of actual live rock to the tank as I have not seen any more leaks...YET!!! I will add a third to the actual tank, probably from my 40b as the others I have in my brute trash can are to big. I will put the ones in the brute trash can in the sump. I will take a pic later on and post as it is to bright right now and wouldn't show the tank properly.

And let their be light 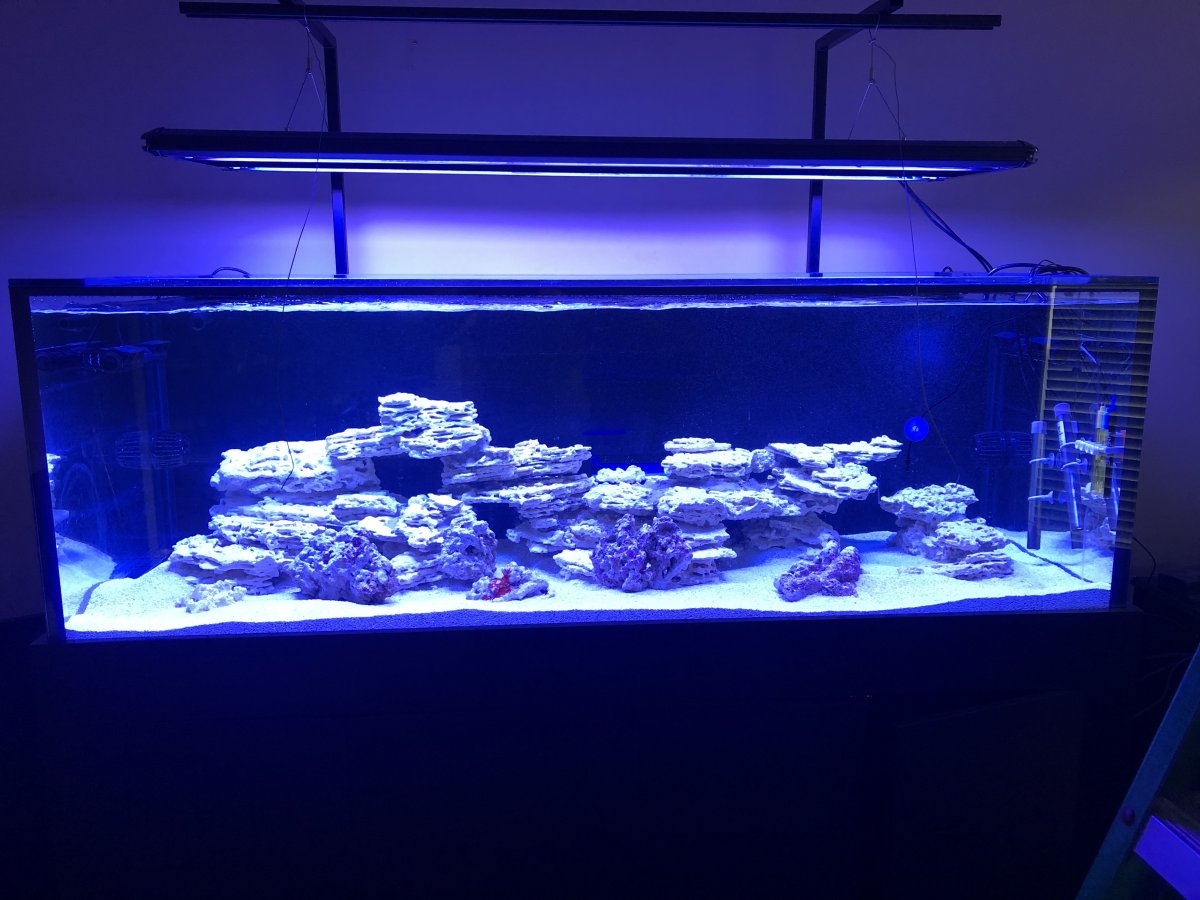 I installed the hybrid fixture today, I will install the LED’s in a little bit. I will fine tune the height, but it is level. I also started working on the elec panel on the left side. I installed the EB832, the MP40, the DOS, and the ATK. I would have my ATO actually working, but I keep running into issues with the Apex task manager. Until it gets resolved, my ATO will not work, UGH!!! 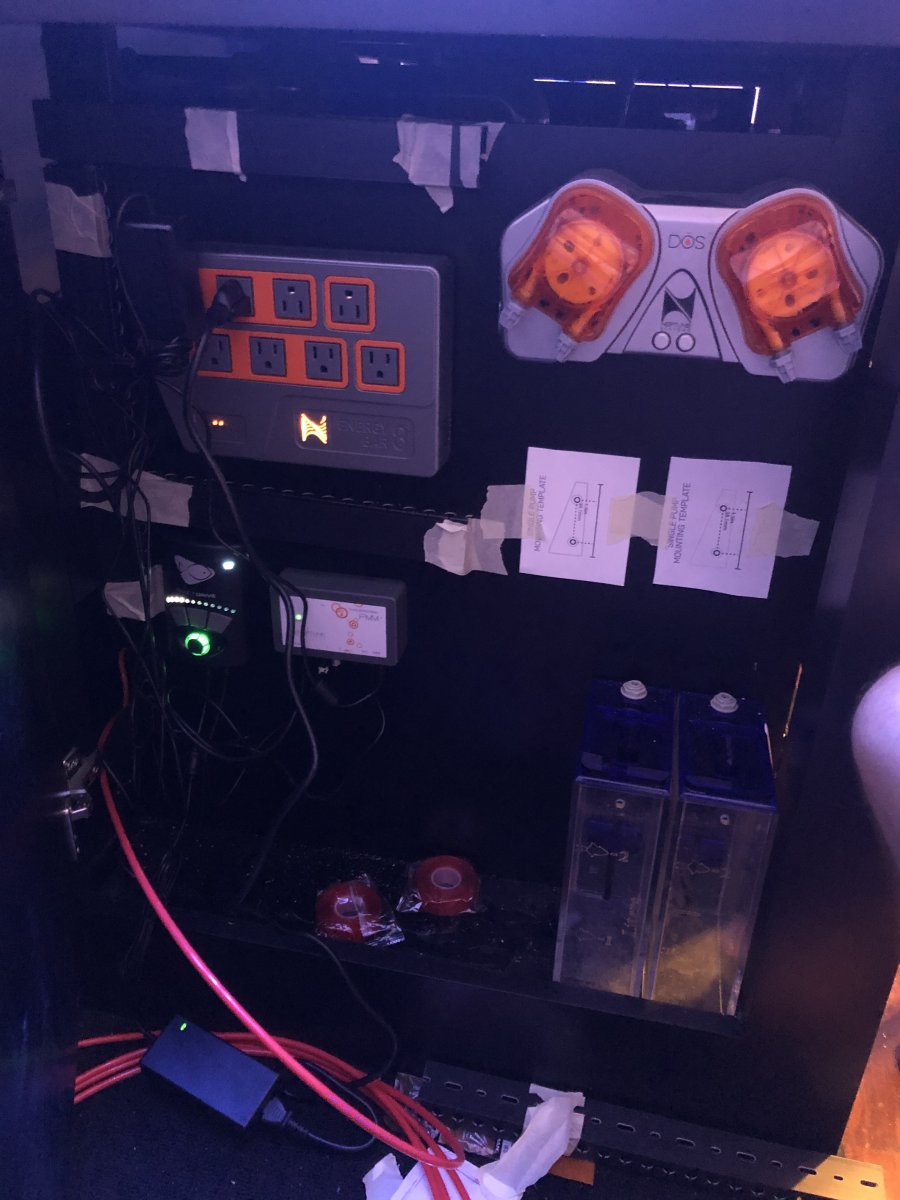 I will install cable raceways in a little bit to hide the cables.

I was able to get the ATO fixed with the help of a friend that know's the Apex from and back. It was an issue with deleting modules and coding being left behind as a result. Even if you delete a module thru Apex, it doesn't always remove the coding that is linked to the module.

Not to be impatient, like none of us are, LOL, but I just built the platform and installed my Apex Trident. I am currently going thru the motions of setting it up, AGAIN, right now. I am currently priming everything. 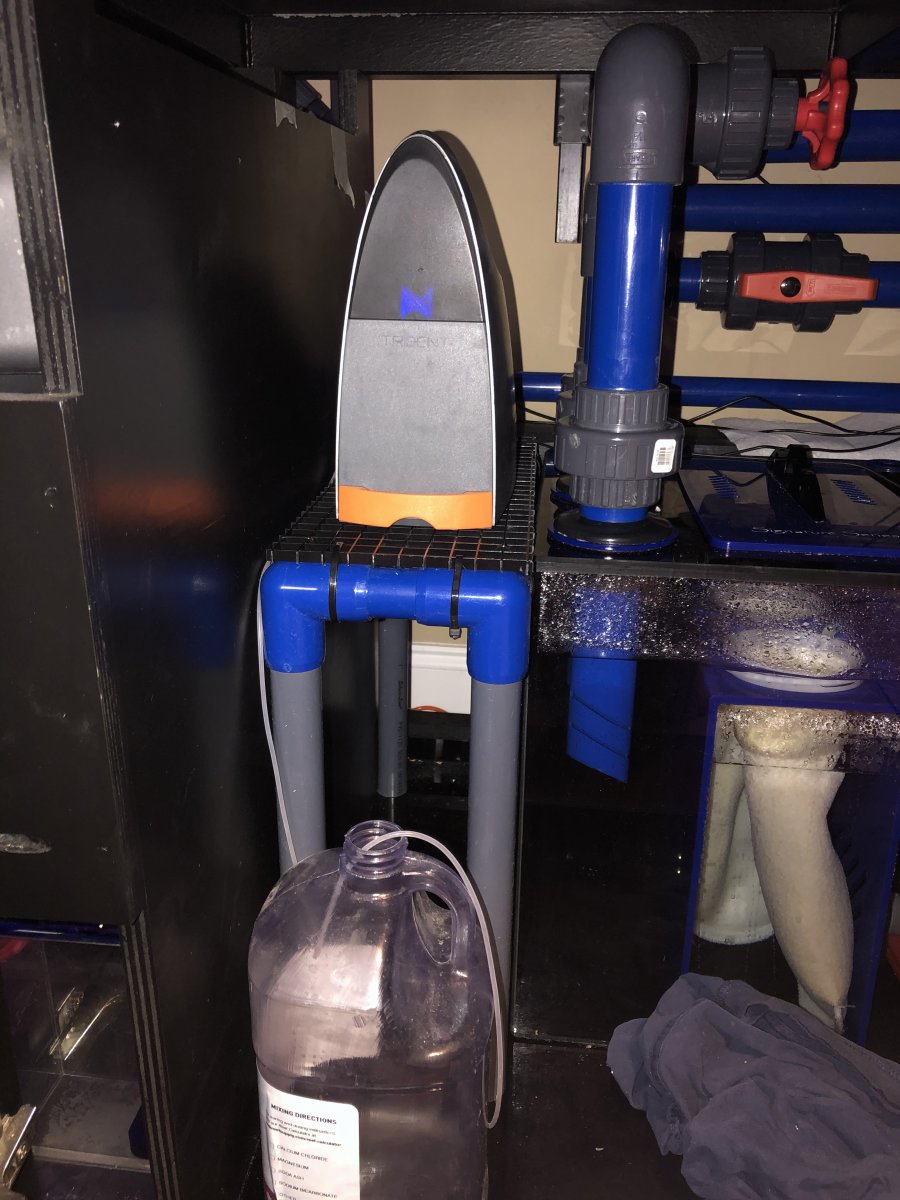 It FELLS GOOD to kinda be back to the normal salt water aquarist hobbyist.

And let their be even more light, LOL!!! I just added 4 Ecotech Radion XR15 G5 Blues. 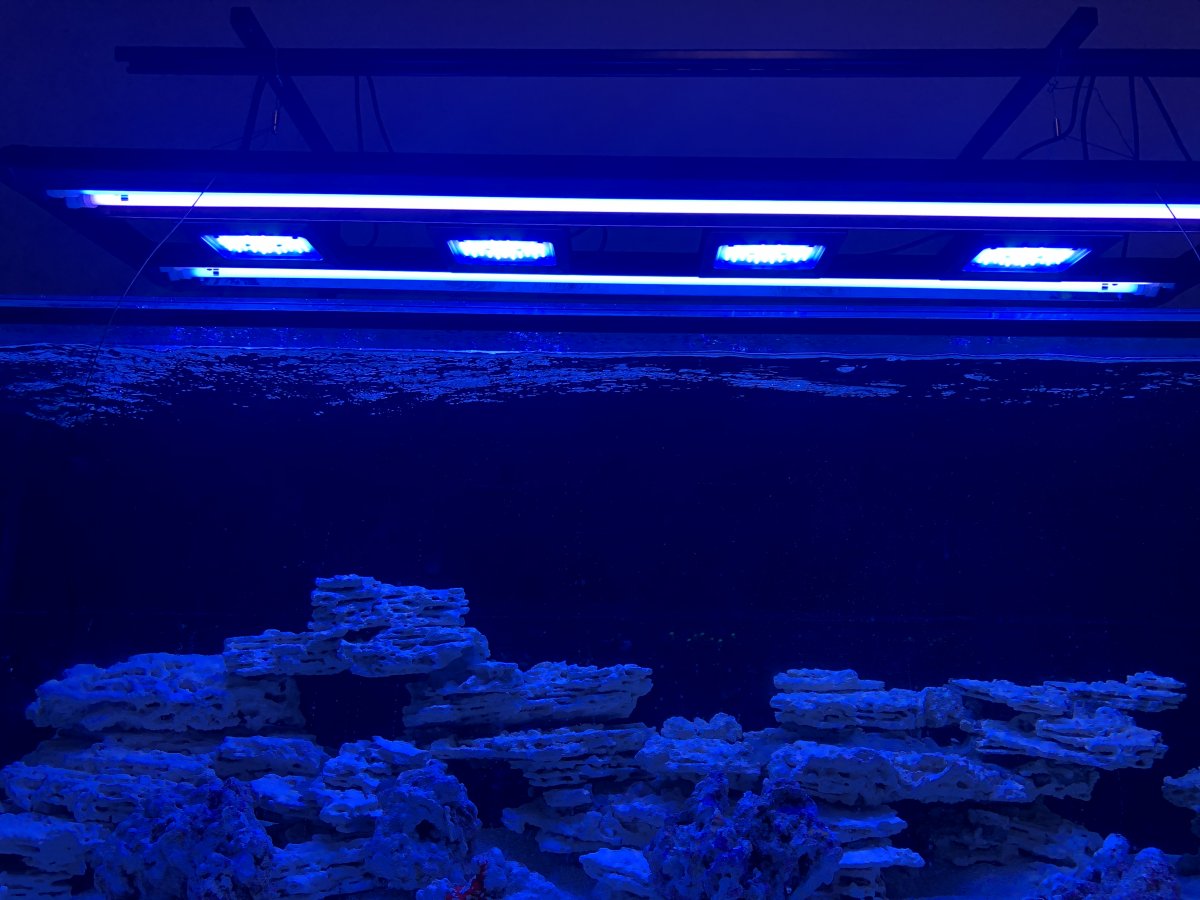 Just took some quick Par meter readings and with the T5's on and the LED's on AB+ and 50 percent intensity I am getting 200+ Par across the sand bed.