Menu
Log in
Register
Install the app
You are using an out of date browser. It may not display this or other websites correctly.
You should upgrade or use an alternative browser.

I updated my duplicate thread over on Reef2Reef, but it ended up being too long to copy over here. I know it's inconvenient, but if you would I'd love for y'all to pop over there and give it a read!
Cynarina lacrymalis spawning project & setup. | Page 2 | REEF2REEF Saltwater and Reef Aquarium Forum

Update time.
The tank is doing really well! Algae has just about disappeared from the tank, and the sand is ack to it's crisp white state. I forgot how destructive turbo snails were! They've knocked my corals over more times than I can count. For now, I'm just going to leave them be, since the corals don't mind and it actually looks very nice with the polyps all pressed together. 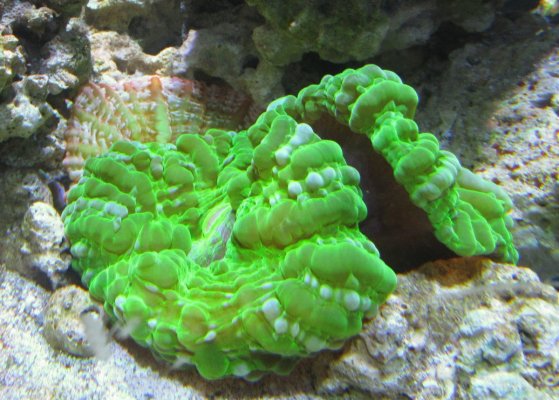 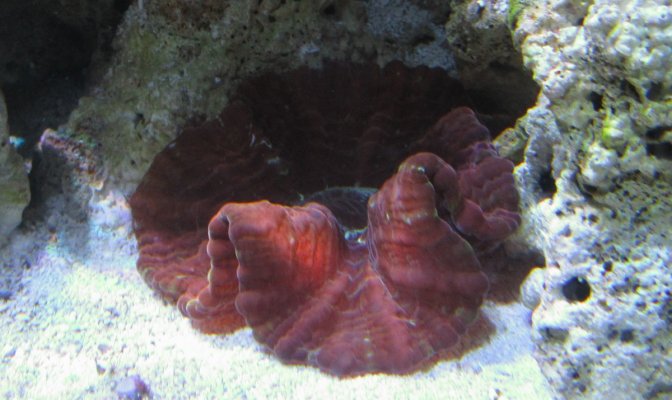 I'm beginning to raise temps and increase photoperiods now, the last increase will be in mid June when I get it up to 15 hrs per day @ 78 degrees.
I've noticed something very interesting over the past month. It appears that each polyp has gained a certain amount of a white pigment appearing on each polyp. The corals also seem to be less transparent in color, which is interesting. I assume that it's some sort of defense against higher light levels, so I'm curious to see if these white pigments diminish when I begin dimming the lights this autumn. So many things to learn about these animals! Hopefully I'll be able to decode some of it.
PS, I'm about to begin working on a timelapse feeding video that I'll share here in the next couple of weeks, I'll link it here for anyone interested.
T

have you given any thought to what kind of nutrition exists around the time that these guys spawn? Does the water and temps coincide with an excess in phytoplankton production or even and type of particulate foods that should or could be in the water column when these are spawning? I'm curious if a trigger is possibly things like "nights" followed by new moon etc the way that the guy spawning acros in captivity did it.

have you given any thought to what kind of nutrition exists around the time that these guys spawn? Does the water and temps coincide with an excess in phytoplankton production or even and type of particulate foods that should or could be in the water column when these are spawning? I'm curious if a trigger is possibly things like "nights" followed by new moon etc the way that the guy spawning acros in captivity did it.
Click to expand...

I haven't thought of that! I guess I could try to find some plankton cycle charts for the area, perhaps they'll coincide. I have a feeling that temps will be the most important factor for these guys, since they are found deeper in the water/on reef cliffs where they don't have much direct light. I do still want to set up a lunar cycle for the tank, but for now I don't have the equipment to do it. I haven't found any lunar lights besides ones that need an Apex, so I will probably have to program some myself. Which I don't know how to do lol
Last edited: May 24, 2022

A pretty shot from the tank. It looks like the red flat one is getting some yellow tints on the bubbles! It may develop into something really interesting down the road.

The frag swap on Saturday was a total hit, I had a blast and was even able to sell some artwork, which was really nice. In addition, I picked up a giant green Cynarina from @TRSCAQUATICS that is now settling in. And I'll tell you, she is massive! After only two days, she's opened up the same size as my two biggest ones. Hoping for some good genes from her, she's got a lot of weird hues and secondary fluorescents going on that I can't wait to see pop!

In other news, four of the corals somehow grouped together like this in the valley! Not sure if snails were pushing them around or if they are doing it on their own, but I guess we'll see as I moved them all back to their spots.

The maroon one is just jiving in the corner for now, however he has company! Somehow, aiptasia got into the tank and have moved in around it's mantle. Luckily, I've seen some ads for Berghias in the sale forum so I may get a couple to take care of them.

Today also marks this system's first ever water change! I went ahead and siphoned out as much detritus as I could get, but I forgot I needed the water for another tank so big fail there. I'll have to get some more next week.
In final news, my main tank is at a point where I can begin putting my hammers and nems back in. The tank will be a cynarina-only tank once again.
You must log in or register to reply here.
Share:
Facebook Twitter Reddit Pinterest Tumblr WhatsApp Email Share Link
Top