So, out of the Sixline Wrasse and Yellow Coris Wrasse, which one is better? Also, do they get along with eat other?

I pick yellow coris, less of an asshole

My sixline and yellow get along no problem. I think the yellow coris wrasse is one of the most underrated fish out there. People always seem to love them once they are in their tanks even though they are fairly common

Yellow coris is definitely going to get along better with others compared to a 6 line. Do you have a sand bed for it tho? A long time ago I had a yellow coris, the older he got he started to mess with my hermits though.

Never had a six-line but I have 2 yellows in my DT. They get along fine.
I have a melanurus in my frag tank...he's cool too.

Ditto on all the above. 10/10 I would choose the Yellow Coris. It’s a highly rated fish that is yet still underrated. While 6-lines are slightly overrated... still great fish, especially if you have certain pests, but have a relatively high probability of being a bully.

Yep, yellow coris. I've had both and not only are the yellow coris wrasse's better looking but they seem to have a bit more personality. They are both world class carpet surfers so make sure you have a lid whichever direction you go.

Wow, that’s good to know. Well, I have a sixline now. It gets along with everyone in my tank for now. Was thinking of getting a yellow Coris. I saw NanCrab’s File fish so got that one too first. Omg, all my aptasia gone in one week. Never thought it was possible. But, I really want a Coris and now I really hope the six line will get a long with it, when I do get it. But I have a bare bottom tank. Is it really necessary for sand for a Coris? And does a Melanurus get a long with these two?

Yellow will get larger than six line so keep that in mind. Yellows will also require a sand bed to sleep in.

Wow, that’s good to know. I wonder if I just put a Tupperware in there with crush coral, it will be ok for the Coris? Haha

Oh, I just noticed that there are other Coris wrasse color. Are they all the same or is the yellow one best for pest control? I don’t have pest problems now, but just planning for the future. Haha just in case

I have yellow in frag tank with little sand oasis. 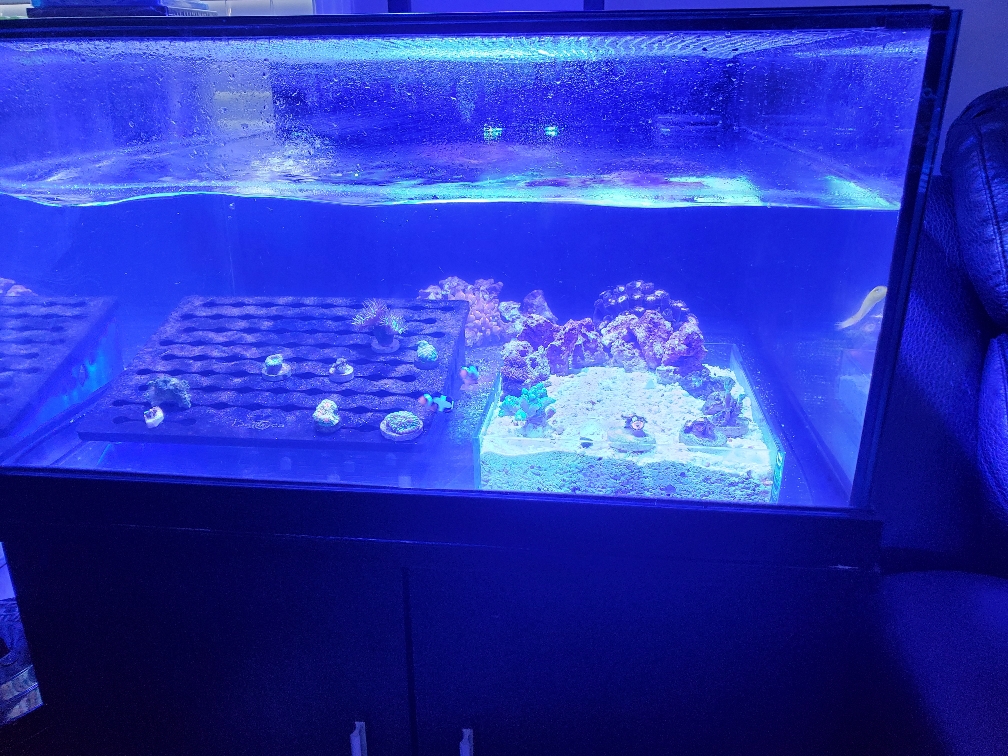 Sent from my SM-N975U using Tapatalk

The red corris get very large if I’m not mistaken. There’s also two types of yellow corris wrasses, on will have a white belly and I believe the other just has one or two black dots on their dorsal fin. The white belly type also get larger.

Wow, that sand bed looks legit!!!! Haha ok, so get the yellow that is smaller. Great info everyone!!! Thanks so much!!


Sent from my iPhone using Tapatalk

I just noticed your frag tank water is so low. WC or evil (good) plan?

I have sixline, yellow coris, and melanarus wrasse. All three get along just fine.

FYI, you will also need sand for a melanarus to burrow into for sleep. Like @snarky shark, I had a container of sand in my quarantine tank for a melanarus. He wasn't the neatest bed maker in the joint! He threw sand all over the place when he dug in for bed!

+1 for yellow coris. I never thought much of them until I saw a 4” yellow coris at Nemos and it was amazing. Never knew that they had markings on their face like a melanurus. I snagged it up and have no regets.

MiggidyMike said:
Oh, I just noticed that there are other Coris wrasse color. Are they all the same or is the yellow one best for pest control? I don’t have pest problems now, but just planning for the future. Haha just in case
Click to expand...

Re: Are all Coris the same?

I’m not sure exactly what you mean, so I may be misinterpreting. They are all very very different in many ways. But they have common elements to expect from them. They all have roughly the same body shape. They all have very tiny mouths compared to other fish their size... this can make them picky eaters. They all like to pick their food off of rockwork (for all the reef-safe coris; this means copepods, Nudis, and other microfauna). Also... every fish is an individual and has its own preferences.

So to answer your question (no, yes, yes, yes, no, no). Lol... so that probably averages out to a ‘no’. You’ll have to learn about each fish before you get it.

You generally do not have to worry about non reef safe coris wrasses. They are exceptionally rare in the hobby, and usually only imported by accident. So when they arrive in the states, most people have no idea what species they are: so they likely won’t even be labeled correctly.

Yellow Coris are one of the most popular! Great personality. Great Color. And relatively easy to convince them to eat. Highly recommended!

Another one worth mentioning is one of the most sought-after fish in this hobby. At my old LFS, we would get more requests for this fish than almost all others combined. But NOT recommended. This is the Radiant (Coris) wrasse. The downside to Radiants, is only about 1 in 8 will eat in aquariums... so 87% will die from starvation. It’s terrible, but many people convince themselves that they ‘need’ this fish... and then they keep buying and killing them until they get one that eats. And that percentage is if you have lots of food options and experience. Still, keep this fish species on your radar... and it can be a relatively affordable treat/gift for yourself in a couple years, especially if we can breed them more in captivity.
Last edited: Wednesday at 6:35 AM

Active, now you make me want a radiant wrasse too eye roll and a lmfao rolling tongue out laugh.